NPDA 2021 Nats will be virtual 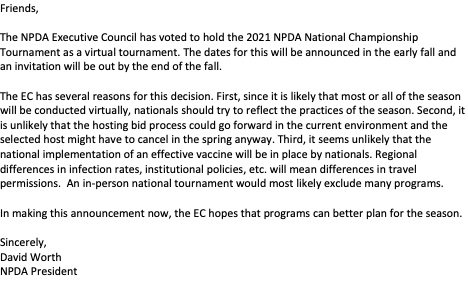 The NPDA Executive Council has voted to hold the 2021 NPDA National Championship Tournament as a virtual tournament. The dates for this will be announced in the early fall and an invitation will be out by the end of the fall.

The EC has several reasons for this decision. First, since it is likely that most or all of the season will be conducted virtually, nationals should try to reflect the practices of the season. Second, it is unlikely that the hosting bid process could go forward in the current environment and the selected host might have to cancel in the spring anyway. Third, it seems unlikely that the national implementation of an effective vaccine will be in place by nationals. Regional differences in infection rates, institutional policies, etc. will mean differences in travel permissions. An in-person national tournament would most likely exclude many programs.

In making this announcement now, the EC hopes that programs can better plan for the season.